The laurel has been conferred upon him for the album Indus Raag: Music Beyond Borders which is a part of the Indus Raag project that aims to archive the legacy of sub-continental music tradition.

Talking to The Express Tribune, Awan said he has been selected among nine artists from various countries for the medal. This is the first time a Pakistani album has featured in an international award show. “It really is an achievement for all those who have been associated with the project and have worked tirelessly to make it a success,” he added. Awan hoped the project will continue to play its role in the conservation and promotion of Eastern classical music.

It is pertinent to mention that Indus Raag: Music Beyond Borders was Pakistan’s first indigenous entry to get shortlisted for the 57th Grammys.

GMAs are held ever

This article is published in The Express Tribune, June 19th, 2016.
Web link: http://tribune.com.pk/story/1125273/indus-raag-producer-wins-global-music-award/

There are accounts, treatise and memoirs that deal with reality, going deep into the psyche and culture of the people supplemented with facts and figures to prove a point. Then comes a fiction, essentially doing the same but hitting where it matters the most … the reader’s’ heart. The Spinner’s Tale, the second novel from policeman-turned-author Omar Shahid Hamid, grabs and shakes your soul to the core.

Following two characters, Omar Abbasi who is a police officer, and Shaikh Uzair, an educated jihadi mastermind, the author explores the world of modern jihadis that come from prestigious institutions and walk the path of violence and gore. As if by intuition, Omar Shahid Hamid has brought forth a dangerous trend in the form of fiction when Pakistani society recently experienced similar occurrences in its reality.

Following the trend set in his first novel, The Prisoner, Omar Shahid Hamid not only explores crime from the perspective of a police officer but also continues the story in parallel timelines. The current timeline is one where Omar Abbasi is on a wild hunt, and the past timeline is explored through letters written between two old friends and cricket fanatics, Uzair Ahmed Sufi alias Ausi and Adnan Shah alias Eddy. While it was often confusing to follow story in The Prisoner due to sudden changes between timelines, the legible dates and year made it easier to follow the story in the new novel.

The letters are the driving force behind the story. Written between two best friends they form a link as everyone takes a different path once school ends. Uzair joins medical school, becomes active in party politics, gets in trouble, drops out, runs away, goes abroad and eventually joins the Kashmir rebellion that makes him the known and dreaded Shaikh Uzair. He’s in love with his childhood best friend Sana Safdar, daughter of a bureaucrat, who goes to Boston for higher studies and does some soul-searching once life takes several twists. She’s also central to some of the letters written by Adnan Shah, their childhood best friend who also goes to US for higher education, as he maintains contact with Uzair. Talking about cricket and highlighting the deadly effectiveness of spin bowlers such as Mushtaq Ahmed, Saqlain Mushtaq and even Shane Warne, the letters not only follow Pakistan’s cricket exploits of the 90s but also its development on a political and personal level. If you want to know how important this communication was between the two best friends, Adnan manages to get one letter delivered to Uzair in Indian prison after Cricket World Cup 1999!

The author once again brings forth explicit details of life. People make choices that lead to a certain direction, a certain future. It can be a woman baring herself for sexual pleasures that comes back to haunt her, a jihadi murdering a pregnant journalist to prove a point and then becomes a most wanted man, a wannabe banker dreaming to make it big on Wall Street by cutting ties from his past… what they go through and experience is not easy and every action has a consequence.

The novel, while it manages to hit you in the face with realities that go behind the scenes, suffers from some of the shortcomings similar to the first novel. There is a lot more telling than showing, with long accounts gleaned through letters. While the details are engaging, the letters from both Adnan and Uzair feel like they are written by the same person. Besides that there is very little in the novel which would go unappreciated. The harrowing tale of Uzair Ahmed Sufi, who becomes the dreaded Shaikh Uzair raises heckles and sends goosebumps right through the reader’s body. The Spinner’s Tale is a must read to know the psyche of modern jihadi and his motivations.

The Spinner’s Tale is available at all Liberty Books outlets and online via the following link:
http://www.libertybooks.com/bookdetail.aspx?pid=25488

‘Karachi Raj is that rare thing: a rollicking read and a great insight into a much reported but little understood place’
-Mohammed Hanif

I believe that Mohammed Hanif, who has written two magnificent novels, very aptly describes what Karachi Raj is all about in a mere sentence that, although, seems short and precise but goes on to say a lot about Anis Shivani’s latest contribution to the literary world. Being an avid reader myself, I never imagined that Karachi could ever be depicted and thought of like this before. Perhaps the constant supply of heart aching news of a wonderful city never gave us the time to think that maybe this coin too has a flip side, a side that shows the sheer brilliance of love, friendship, and family bonds. Shivani does exactly that and weaves magic on paper with his enticing new tale.

Karachi Raj brings to life the intricate and an extremely special relationship between two siblings, Hafiz and Seema, who inhabit a Basti in Karachi. They grow up into well matured beings despite the hardships that life had in store for them. Even in the terror prone city, all they manage to see around themselves is love and goodness. That is the sole reason you simply can’t put this book down. The characters, so beautifully woven into the writing, give you a bird’s eye view of what it is to live in a Basti yet lead a blissful life.

Soon enough Seema receives a scholarship to attend a decent university, but Shivani made it a point to not make that seem too easy. He raised the most disturbing issue of Pakistan – girls’ education! The social stigma attached to this has been presented and dealt with dignity. This is also not the only problem our characters face. There’s Hafiz who’s greatly infatuated with a colleagues wife that evidently kicks off a story of love, friendship and betrayal. And while the people of the Basti struggle to embark on a journey outside of it, there’s an American ingénue who feels that the Basti may have more to offer than it seems.

The author tells his story with grace and poise, which can easily be felt via his sentence structure and the method through which he takes his idea ahead that almost makes you feel like you’re a part of his storytelling process and might as well be in the very same Basti. The novel offers you a once in a lifetime chance to go beyond the constant racket of politics and terrorism and delve deeper into the delicacies of life that also happens to serve as a moral of the story – living your life to the fullest despite adversities. Picking this up from bookstands is a must!

Anis Shivani is better known for his prose and poetry published in leading newspapers and magazines. Karachi Raj is his debut novel and is available at Liberty Books. You can order it online via: http://www.libertybooks.com/bookdetail.aspx?pid=25340

“Mr Hiro, born in Sindh before partition, has written a highly readable account of a complicated history.” Read the complete review here:
The partition of India: Divide and rue | The Economist. 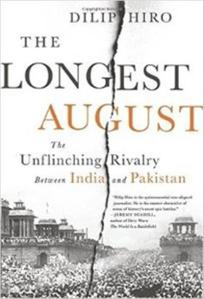